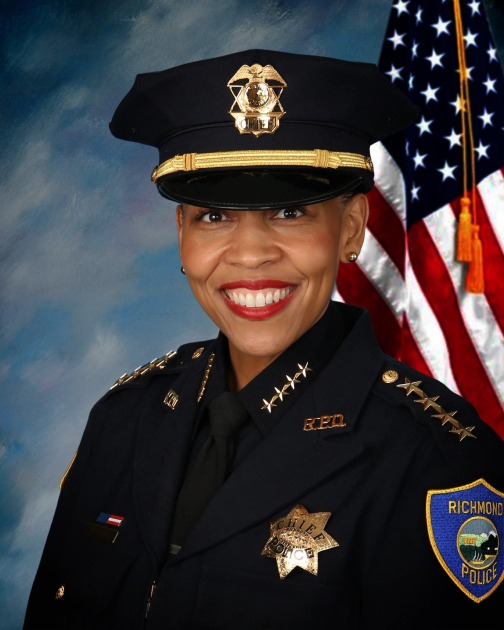 Police Chief Bisa French began her career with the Richmond Police Department in 1998. As a young officer, she formed meaningful relationships with community members as a Community Policing Officer, Field Training Officer, and Bicycle Patrol Officer. She then worked as a Detective in the Property Crimes Unit and Family Services Unit, where she found her passion advocating for young people.

Chief French was promoted to the rank of Sergeant in 2006. In this position, she led, mentored, and developed officers in a variety of supervisory assignments. She also served as the department’s Public Information Officer during this time. In 2011, Chief French was promoted to Lieutenant. She worked with various stakeholders to include Contra Costa County, STAND! For Families Free of Violence, and Community Violence Solutions, to establish the Family Justice Center in West Contra Costa County, which opened in 2015.

In 2013, she was promoted to the rank of Captain. She was the first African American and Latina Captain in the Richmond Police Department and the youngest person to ever hold the position.

After three years, Chief French was promoted to the rank of Assistant Chief, whereupon she became responsible for the overall operations of the department. In this capacity, she also worked on programs centered around racial justice and equality in the criminal justice system. Chief French was appointed Interim Chief in 2019 and was hired as the permanent Chief of Police in July 2020. She is the first female chief in the Richmond Police Department’s 110-year history.

Chief French has a Bachelor of Arts degree in Public Administration from Union Institute & University and a Master’s Degree in Human Resource Management from Golden Gate University. She is also a graduate of the Police Executive Research Forum’s Senior Management Institute for Police (SMIP). Chief French serves on Contra Costa County’s Racial Justice Oversight Board and is on the Community Policing Committee for the International Association of Chiefs of Police (IACP). She is also a board member for several organizations including the Family Justice Center, Contra Costa County Youth Services Bureau, and the Richmond Police Athletics League.

Chief French is a Bay Area native and a proud Richmond resident. She and her husband have three children.